In 2003, Michael was accepted into the Australian National University School of Music to complete a Bachelor of Music (Jazz) degree, graduating in 2006. He was awarded the 2005 Michael Foster Scholarship, for outstanding achievment in Jazz.

Michael has been the co-leader on two projects: Whilst at ANU, Michael was approached by USA bassist and ANU lecturer Eric C. Ajaye (Freddie Hubbard, Bennie Maupin, Nancy Wilson, Pointer Sisters, Taj Mahal) to form the Canberra based trio “Straight Up!”, along with drummer Chris Thwaite (Katook). They released 2 albums; “The Flow” in 2006 and “Another Year” in 2007. Both albums received critical acclaim and are played regularly on National radio. Their performances throughout Australia received rave reviews.

In 2008, Michael joined bassist Jeremy Alsop, drummer Mark Charters, and trumpeter/programmerRohan Wallis to form a brand new project called “The Strange Music Of Reality”. They have released their debut album  “Volume 1″ and future albums are being planned. 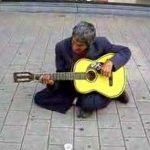