Getting my music gear organised…

Im not normally an overly neat and organised guy but after searching through my gig bag numerous times for my tuner pedal in the hazy light of a stage for soundcheck I thought there had to be a better way.  The bag I was using had three large pockets that held everything no worries but it amazed me how many times I would go through the bag three times to find something.  I needed to have all my gear visible in front of me.  That’s when I thought to design my own bag with all my leads on one side and my gear in see though pockets on the other.  After teasing out the design process the next step was to turn my idea into reality.

Phase one was to learn how to use the sewing machine and turn out something that could store my gear how I wanted it to but as you can imagine the quality of the bag was woeful.  This was the first time I had used a sewing machine after all.  But it gave me a prototype to give to a seamstress to produce a hardwearing, functional version of what I was after.  After quite a few tweaks and input form a commercial designer friend I had something that fit my needs.

In the course of making the bag I had chatted with other musicians, mostly guitarists who said that they would want a bag similar to mine if I could find a way to produce them. This lead me to start this company to try and make carrying peoples music gear as simple as possible. 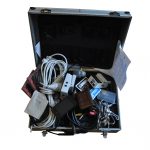 The nine things every musician must carry…Music Gear Organisation